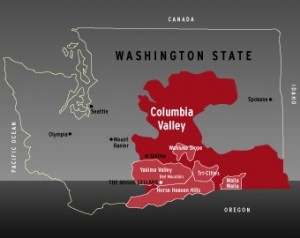 Classique Wines and Spirits is very proud to bring some of the best Washington State wines to Missouri!

The Washington wine industry has come a long way. The first people who produced wine in Washington were German and Italian immigrants who planted their grapes during the 1860s and 1870s. Following the end of Prohibition, Washington’s wine industry was based mostly on sweet fortified wines made from Concord grapes. In the 1950s, the planting of Vitis vinifera increased, in part by the work of Dr. Walter Clore and Washington State University which conducted a series of trials on which grape vines could produce the best wines in various soils and climates of Washington. Today, Washington ranks second in wine production, with only California in front of them.

In 2013, Classique brought three Washington State wineries into the portfolio: Zero One Vintners and Sleight of Hand Cellars.

Husband and wife team Kristen and Thomas Vogele founded Zero One Vintners in 2006, bringing more than 20 years of experience to their boutique winery. Their focus is making a limited number of wines in a distinctly unique and elegant style from the Columbia and Walla Walla Valleys, delivering exceptional quality for the price.

Out of Walla Walla, we have Sleight of Hand Cellars, which has been hailed as one of the next cult wineries in Washington State. The winery was formally established in 2007 by partners Jerry and Sandy Solomon and Trey Busch, who also serves as winemaker. Their goal is to provide consumers with “Simply Magical Wines”, and there unique red wines have received many high scores from wine critics. Renegade Wine Company is a side project of Trey Busch, and those wines are often referred to as “an insane value”.

If you love Washington wines, these are certainly worth seeking out! Stay tuned for more great products…