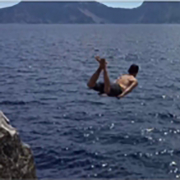 Well, that’s Ryan…jumping off of a cliff. You won’t see his face because he doesn’t want to be “Googleable”, but he’s one of our St. Louis sales reps and he’s pretty good at what he does.

Ryan has been an important part of the team since his start in 2006. Not only does he provide the St Louis metro area with fine wine & spirits, but he also plays a pivotal role in bringing new products to the Missouri market. You could say he’s kind of a big deal, but don’t. His impressive taste and drive for success hav been Ryan’s leading qualities since day one.

While much of his time is spent focused on his career, you can also find him skiing the back bowls or cliff diving. When he isn’t using his body as a metaphorical torpedo (pictured), he enjoys landscaping and watching Michael Jordan highlights from the 80’s-90’s.

Hyde #7 is here!
Scroll to top