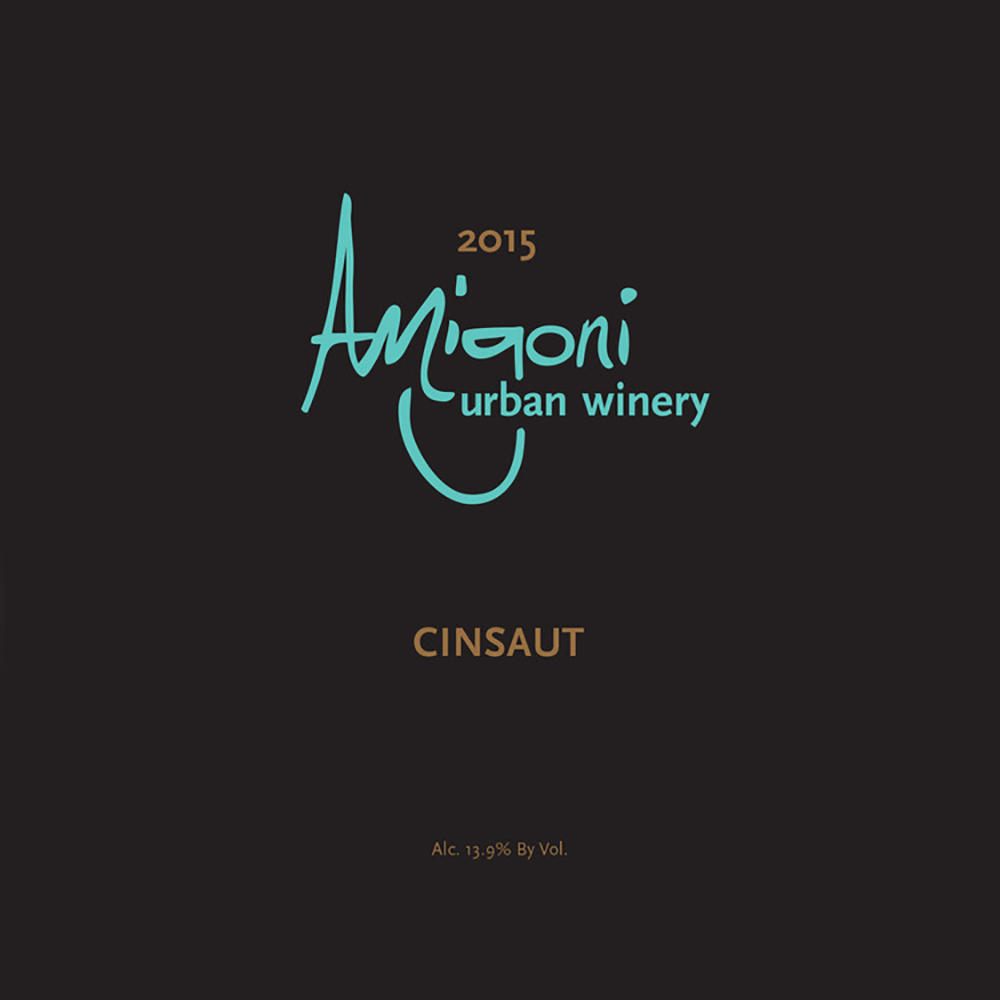 Dark and silky with bold aromas of dried herbs and plum flavors of dried fig, black currant and mulling spices. Cinsault is primarily a blending grape or is often used to make rose. Finding a 100% Cinsault is rare. Aged 12 months in Missour Oak Barrels.

The History of Amigoni Urban Winery
The Amigoni family, Michael, and his wife Kerry, were passionate about wine when they decided to start making their own in 1995. By 1997, they had planted forty Cabernet Franc vines in the backyard of their Leawood, KS, home to see if they could make wine from local grapes. The vines they selected to plant were Cabernet Franc. A cold hardy French variety in a premium wine class called “Vitis Vinifera”. It was a grape that could weather the Midwest winters.

As amateur winemakers, the Amigoni family saw the fruits of their labor rewarded when their wine won a series of Blue Ribbons in local wine competitions. In 2000, the family decided to take the next step and purchased 10 acres of pastureland in Centerview in Missouri. Centerview is about 45 minutes east of Kansas City. In 2001, the first acre of grapes was planted with the intention of selling them to home winemakers. By 2004 and 2005, the first crops were harvested and sold to local home winemakers and a commercial winery near Columbia, Missouri.

Finally in 2006, the Amigonis were ready to harvest their first commercial grapes to make their own wines. Every year, a little more of their land was developed for grape growing with various other vinifera vines planted and tested. The Amigonis were official winemakers.

The Amigonis’ commercial winery was originally named Inland Sea, but has now been rebranded with their family name as the Amigoni Urban Winery. They call themselves an urban winery because from the beginning, the Amigonis wanted to make their wines accessible to everyone. By opening their beautiful tasting room in the urban core of Kansas City’s West Bottoms, they have succeeded in bringing their wines to the people of Kansas City, where they can be sampled, shared and purchased easily.

The Amigonis harvest their grapes by hand in September and October and they are processed in their warehouse on Southwest Boulevard. The winery primarily uses local American Oak barrels from the finest cooperages in Missouri, staying true to their commitment to using local product.

The Amigoni family has a history of winemaking. Grandfather Giuseppe Amigoni immigrated to central Illinois from Milan, Italy in the 1940’s. Besides making his own barrels of wine, he would use his dump trucks from the construction business to retrieve California grapes from the rail yard and make deliveries to Italian Americans in the area. Many of the deliveries would not result in payment. Instead, the payment would be made in person at Giuseppe’s house where a glass of his outstanding wine would accompany the payment.

Amigoni Urban Winery specializes in small lots of handcrafted wines from their vineyards in Missouri with annual case production over 2500 cases. Bordeaux and Rhone varieties are the focus, harvested primarily from their Missouri vineyard and small lots from special vineyards in California. Presently, the Amigoni reds are Cabernet Franc, Cabernet Sauvignon, Mourvedre, Petit Verdot, Carignan and Malbec. Their white wines are either Chardonnay, Viognier and Sauvignon Blanc varietals.

Albariño is the local grape and is known for its ability to ripen in this cool corner of Spain. In addition, it maintains its natural acidity well leading to fresh, balanced wines. Adegas Gran Vinum uses different rootstocks on free-draining slopes as opposed to slightly more fertile plots to assure even ripening.