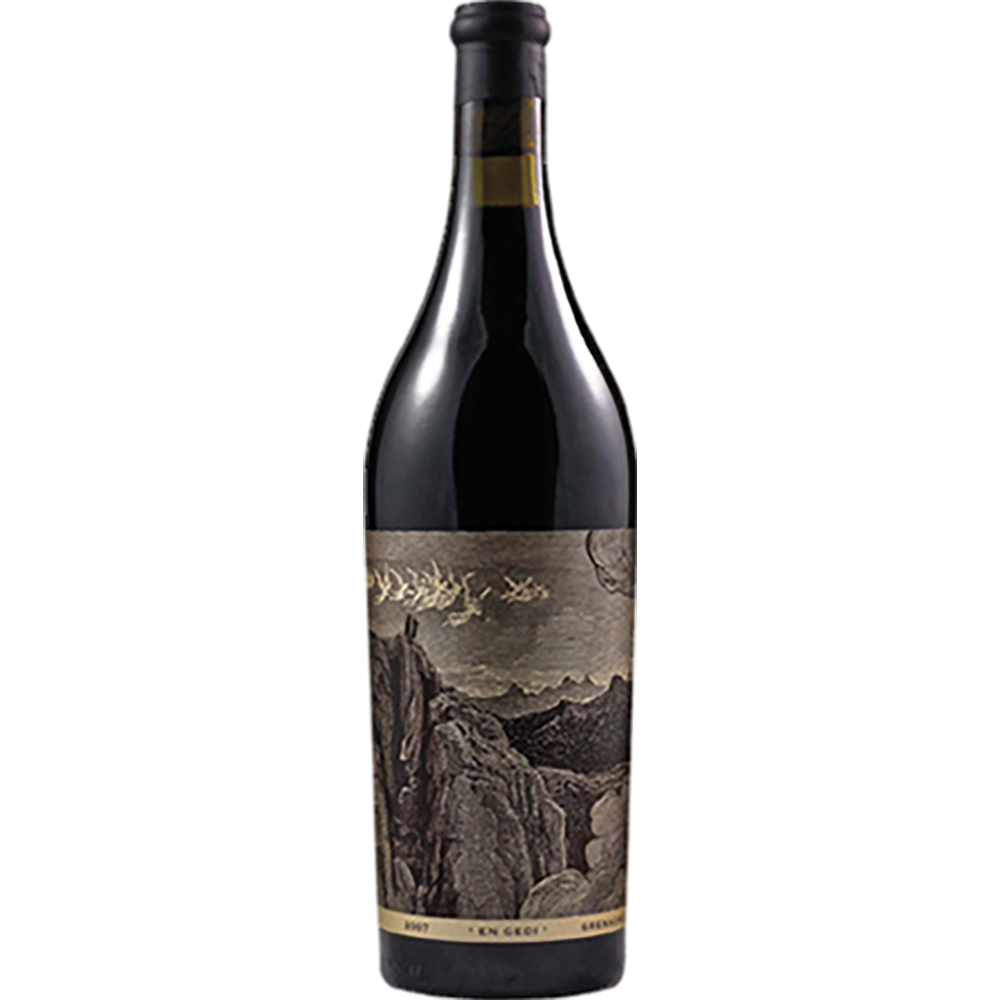 It seems as if you’ve been walking for days. You check your notebook and assure yourself that you have followed the directions “past the wild growing raspberries and sage bushes, then through the field of lavender.” Pausing now to note your location with your graphite pencil and completely ready to give up, you smell a combination of baking cocoa, clove & vanilla. You look up and there it is in the distance – a secret cottage at the edge of the woods. The scents are so familiar; you know she’s there. 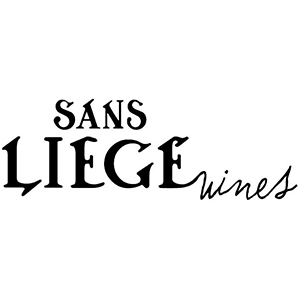 Sans Liege is my relentless search for independence. After many years learning from and working with good friends who have since made their mark as winemakers, I decided it was time to take what I’d gathered from them, and to go my own way. Equally aligned with the freedoms of the New World and the heritage of the Rhone Valley, I am careful not to hold too closely to either. Instead, I trust an intuition of the microcosms of each vine and vintage to guide my work in the cellar.

Sans Liege sources fruit from the Central Coast vineyards that have captured my heart. They speak for me and I for them; the only partners now on this path I tread. – Curt Schalchlin, Winemaker, Sans Liege Wines and Groundwork Wines

VINEYARDS
When choosing vineyards to source fruit from, I favor character over notoriety. Each of these sites have a distinctive appeal that separates them from the rest, and very often my sources are locations passed over by other winemakers. In taking up my own journey, I’ve learned to not discount any field for its quirks and eccentricities, however, for in diversity lies the promise of uncommon opportunity. This is the heart of Sans Liege.

The Central Coast is home to a wide variety of climates, soils and topographies, so I keep my boundaries wide open. Though these appellations are each highly-regarded for their production of Rhone varietals, I’ve found that fruit from my vineyard blocks speak foremost of their individual provenance, a very real story of place, rather than as textbook examples of Mediterranean France. These fields provide the raw fuel for my creative work and I attempt to channel them into exemplary wines, made complete by the union of their disparate strengths.

Pipestone Vineyard
Appellation: Paso Robles
Notes: Located deep in the hills of Westside Paso Robles, Pipestone is farmed sustainably and organically, and may be the only vineyard in California managed and built according to the ancient Chinese principles of Feng Shui (wind and water). Using solar power and draft horses to minimize soil structure damage from heavy machinery, Pipestone Vineyard has a zero-landfill program and is a Certified Wildlife Habitat.

Alta Colina Vineyard
Appellation: Templeton Gap (Paso Robles)
Notes: Owned and farmed by the Tillman Family, Alta Colina is a unique, high-elevation site in the Templeton Gap that spans from 1600-1780 feet above sea level. Planted mostly to a suite of Rhone varietals, the site is composed of predominantly calcareous and loam-based soils that are high in drainage, encouraging vine vigor. The property is farmed with minimal inference, typically seeing only 4 passes each vintage for shoot thinning, canopy adjustments and fertilization. Its proximity to the Pacific Ocean sees cool morning and afternoon fog on the property that helps facilitate a long growing season,, ideal for the ripening of fruit.

Laetitia “Les Galets” Vineyard
Appellation: Arroyo Grande Valley
Notes: Located only 4 miles from the Pacific Ocean, in one of the coolest climates of any wine growing region in the state, Les Galets is a truly unique location for California Syrah production. South-facing hillside blocks of calcareous and volcanic coils offer high drainage, while the constant marine influence, cold nights and warm afternoons combine to promote Syrah that is low-cropped, spicy, intense in dark fruit, yet graceful and structured in acidity. The majority of plantings around the Syrah blocks at the site are to Pinot Noir, which should give some indication of the extremity of cool-climate, humid influence at the vineyard. Very few winemakers have access to the sparse plantings of Syrah from Les Galets, and I feel fortunate to count myself as one.

Alta Mesa Vineyard
Appellation: Santa Barbara County
Notes: Located in Eastern Santa Barbara County in the Cuyama Valley, Alta Mesa Vineyard sits perched above Barnwood Vineyards at 3200 feet in elevation. As the crow flies, Alta Mesa is approximately 30 miles over the hills from Santa Barbara. The soils consist of decomposed granite and clay loam with large rocks of schist, basalt, and gneiss. There is a massive swing of daily temperatures that benefit the long growing season, most often a 40-50F difference between day and night. The site is a favorite of legendary producers like Sine Qua Non, The Ojai Vineyard and Qupe.

Bien Nacido Vineyard
Appellation: Santa Maria Valley (Santa Barbara County)
Notes: One of the longest-planted sites in Santa Barbara County, Bien Nacido is a name synonymous with quality across the work of dozens of the best winemakers in America. The site is heavily marine-influenced an cooler in daytime temperatures than most locations on the Central Coast. Planted predominantly to several clones of Rhone and Burgundian varietals, the property has an incredibly eclectic soil profile, featuring Chamise, Shedd, Elder, Los Osos, Mocho, Pleasanton and Sorrento series. Valley floor blocks, steep hillside plantings and plateaus are exploited by one of the most talented vineyard managers in California, and various blocks of the site are custom-farmed each vintage to meet the needs of winemakers who buy its fruit. Year in and out, Bien Nacido is a source of consistently high quality grapes.

Watch Hill Vineyard
Appellation: Los Alamos Valley (Santa Barbara County)
Notes: Located approximately half-way between Santa Maria and Buellton, Watch Hill is one of the top vineyards in the Los Alamos Valley. The highly nutrient-poor soils of the region are actually a boon to vigorous varietals like Syrah and Grenache, which both excel in the property’s sandy and clay-based soils. The high growing season is fairly long, seeing harvests take place typically near the end of October or in to November, and temperatures swing around 40F from day to night. An extremely high-drainage site, most plantings are on the valley floor to encourage access to the water table.

RBZ Vineyard
Appellation: El Pomar, Templeton (Paso Robles)
Notes: Located just south of Paso Robles in the El Pomar region, RBZ is an 80 acre site that serves as the mother block of cuttings for Sunridge Nursery, one of the state’s best propagators of grape vines. The vineyard is spread out over several rolling hills with elevations of up to 700 feet above sea level. The soils are linne calodo series, comprised of mineral-rich, recessed sea bed, pebbles and a variety of clay and loams, that allow for diverse plantings of Rhone, Bordeaux and Italian varietals. Weather at the site is a bit less marine-influenced that locations just a couple miles west, meaning less fog and slightly warmer days than the Templeton Gap, but high temperature swings day-to-night, indicative of the region, prevail at RBZ as well. Fruit from the property is concentrated, bold in fruit, but never picked for extreme ripeness, remaining balanced in acidity in tannins.

Santa Barbara Highlands Vineyards
Appellation: Santa Barbara County
Notes: This site is a pioneering effort in the development of high elevation vineyards in Santa Barbara County. At 3,200 feet above sea-level, the vineyards are planted in well-drained soils that are particularly well-suited to viticulture, and consist primarily of fine, sandy loam. The Cuyama Valley climate has consistently warm days with gentle b reezes created by continental air masses late in the afternoon, and cold nights due to weak down-valley breezes. With a temperature that can vary as much as 50 degrees in one day, the climate is particularly well suited to Bordeaux and Rhone varietals.

Larner Vineyard
Appellation: Santa Ynez Valley
Notes: The Larner Vineyard is acknowledged as one of the top vineyards on the Central Coast, and one of the best vineyards for Rhone varietal growth in America. UC Davis graduate Michael Larner farms the property with his family, and since 2001, they have contributed fruit to various point-score grabbing efforts from multiple winemakers. Located in the western-most reaches of the AVA, Larner is one of the coldest and most heavily marine-influenced properties in Santa Ynez Valley, and features a diverse soil series of decomposed granite, gneiss, schist, basalt and clay loam. Canopies are adjusted in several hand-passes throughout the growing season to promote very low yields of intensely concentrated fruit. Elevations reach 3,200 feet above sea level and clones are carefully selected to meet the profiles of the various blocks at the property. A telling detail of Larner, perhaps, is that Robert Parker loves wines and produced from its fruit so much, he thinks the vineyard “would merit Grand Cru status in France.